Ahhhh Monday morning! Unlike a good portion of the working population, I quite like Mondays. Mind you, I am fortunate enough to do something I really enjoy, and I generally work from the comfort of my own home. Working in my pajamas is something I try really hard not to take for granted because there was a time, roughly about 2 and a half years ago when I used to drag myself to my interior design job and ask myself over and over again "Why am I still here?"

The reason was fear of losing my so-called life because I had formed attachments to a bunch of stuff within it. After all, working a 9-5 for an established company afforded me financial stability to do all that adult shit we're "supposed" to be doing like getting a mortgage, having a family, owning a car etc. It's an ideal so ingrained into North American culture, that if we don't acquire these things by the time we're 30, we've been programmed to feel like we've failed in some spectacular way. The reality of it is, it's all fucking bullshit! The house, the car, the picture perfect family is all an illusion of happiness. I can say that as someone who briefly succumbed to following the status quo rather than her dreams.

You may be thinking to yourself, "Even the family?" Hell yeah, even the family! When you have a family, it's not something you possess, it's 2 or more relationships in very close quarters that require a significant emotional investment for decades of your life. In the case of children, it's a very one-sided relationship with a rapidly changing human that you may or may not be compatible with. Not to mention you're morally and legally responsible for this ungrateful developing person for at least 18 years. The bottom line is that family relationships are hard work and not the picture perfect Hallmark card-Anne Geddes baby-HGTV bullshit we've all been fed our entire lives. Anyway, I digress...The point is, that none of that stuff will bring happiness or satisfaction unless you have already learned to be content on your own and without any assets to your name.

I know it to be true because the happiest moment of my life was 12 years ago shortly after I left my first husband. I had nothing. I let him keep all the stuff. I was living well below the poverty line in a modest rental house with my mom and 3-year-old son. By all North American societal standards I was a failure. Except I wasn't, because I was still me. In fact, after letting go of all my attachments, I was more me than I had ever been before. It was in that moment that I began to paint again. This painting you see below is what I painted. 9 more followed and became the series known as Sex, Drugs & Shiny Brass Poles. 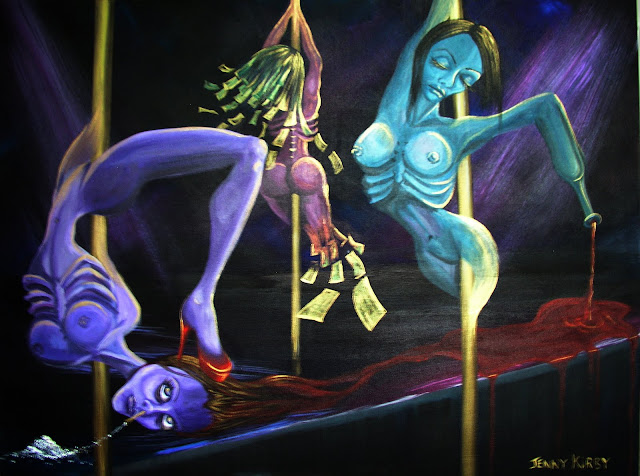 Then I dusted off my guitar that I hadn't touched in years and began to write music and lyrics again. That place of zero attachment was where I gave birth to Borg Queen. Letting go of all that other bullshit left me with just myself. I had to learn to be ok with just myself, flaws and all. I had to accept my situation and not allow myself to feel entitled to a so-called "better situation." I had to learn to live in the present and work with the resources within myself.

I'm not saying that all that adult stuff like a house, a car and family is a bad thing or makes a person less enlightened in any way. I'm older now, and I have accumulated some adult stuff along the way like a house, car and family. I'm grateful for what I do have, but those things do not make me a success. In fact, I have to be very wary not to form attachments to them. If I use them as a measuring stick to determine my worth, I lose sight of the place within myself which is where my true value and happiness lies.

I learned to be content in my current situation, whatever it may be. I have to carry that lesson around with me and remember to be grateful for what I do have, whether it be a little or a lot. Currently the fact that I'm sitting here writing this in my pajamas and afterwards I get to work on some new music for my upcoming EP after I go swimming, is a helluva a lot to be grateful for.