I struggle with perfectionism. Learning to let go of the need to do things perfectly is something I've been working on lately. You know the old saying "practice makes perfect?" Well, I'm practicing being imperfect and not losing my shit or feeling like a failure when I don't do something perfectly.

What I've learned about my perfectionism is that it's rooted in my basic nature of being very detail oriented and meticulous in my work. Being detail oriented isn't a bad thing obviously, but when it's taken to the extreme it can become debilitating. I can get obsessed and fixated on details. I get tunnel visioned and am unable to see the big picture and celebrate my accomplishments.

I grew up with the distorted belief that an accomplishment is when I do something really spectactular or I've won 1st place. I thought I being the best was the only worthwhile accomplishment and anything less than 100% was a failure. I'm realising now how insane that line of thinking is because if I measure my worth against ridiculously impossible standards, of course I'm going to feel unworthy. I have to confess that I don't feel worthy of anyone's time or affection unless I'm doing something productive, interesting or useful.

Changing negative thought patterns is hard work. I'm no stranger to hard work, but the hardest thing about learning to change my thinking is accepting that I'm not going to get it right 100% of the time. I'm learning to celebrate when I do have a partial success and look at the times when I don't succeed more objectively and learn something from them. I'm learning to accept that no matter how hard I try, I wil NEVER be perfect and that's not a failure. My new mantra is...

You don't have to be perfect in order to be successful

I put this principle into practice this past week while designing my latest character for A Bionic Holiday Ballad. Meet Cora. She's the wife of Fletcher the character I designed last week. Whenever I design a character I like to give them a backstory and endow them with as many character traits as possible because I want their appearance to be a reflection of who they are. I often use aspects of my own character as a reference point. In Cora's case I made her to be a recycled material fashion designer/tailor.

Because the world she lives in is a dystopian nightmare, she doesn't have access to brand new materials. She salvages what she can and tries her best to make it work and create something beautiful. In designing her costume I imagined that she would piece together what ever scraps of fabric she could get her hands on. She's creative and has a good eye so even though her outfit is a hodge podge of random materials she's used her innate sense of aesthetics to put together a pallette and design that works and still looks lovely despite not being perfect. 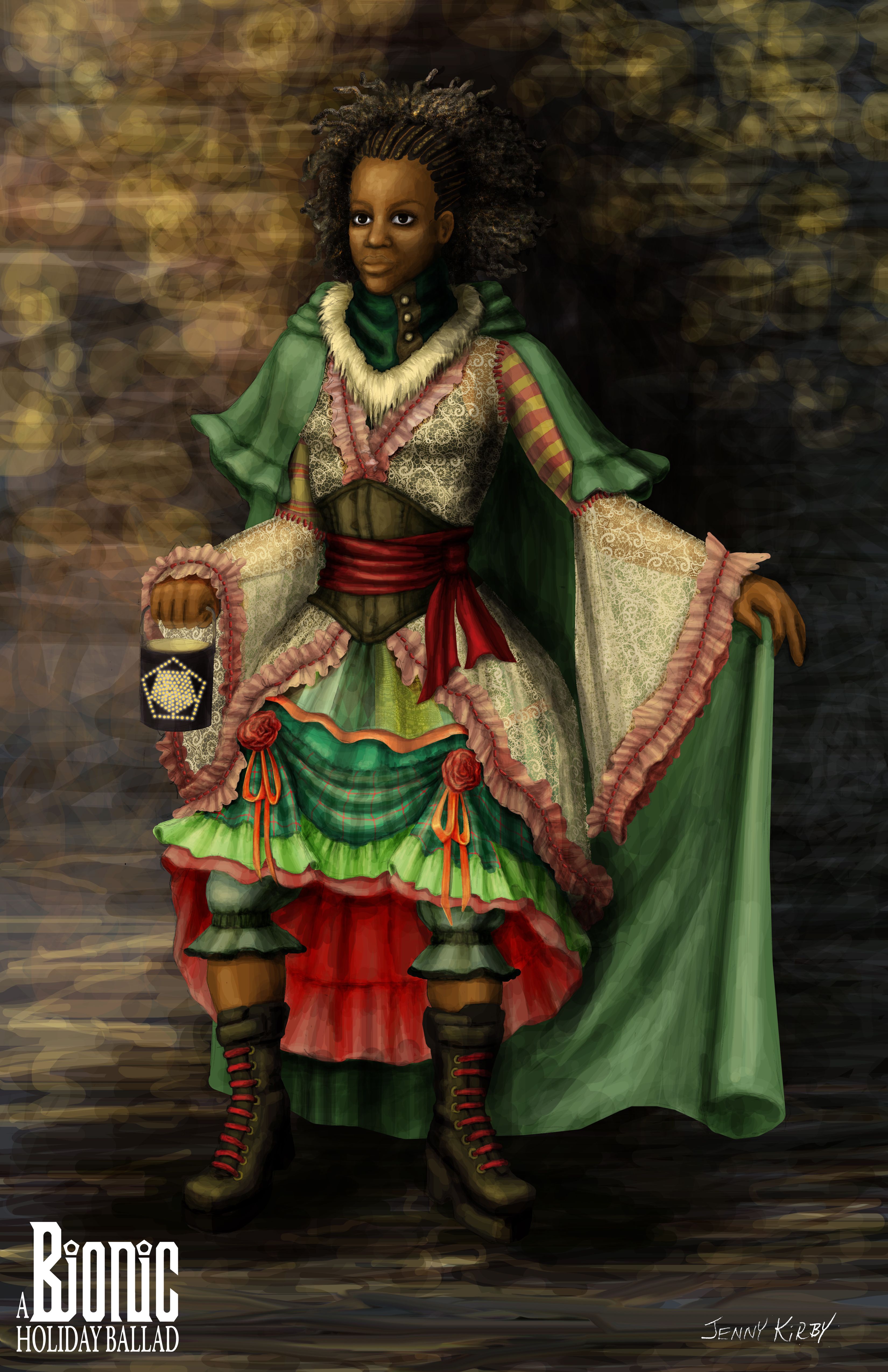 I'm learning to apply the Cora philosophy in my own work both personally and professionally. It's hard, and I have some days where I do well and others that are a complete disaster. I'm having more good moments than bad though and when I look back on the past few years I can acknowledge that even though I'm not perfect I've made a lot of progress.

In creating this film I have to keep the "progress not perfection" mantra in mind because it is such a huge undertaking. I've been wanting to do this idea for at least three years by my inner perfectionist kept telling me that I wasn't good enough to do it or that I didn't have the resources and as a result I'd end up with a product that I'm not happy with. It took me a couple years to get over these negative thoughts and just start chipping away at it, but most importantly I'm having fun.

You can support the creation of this film by purchasing a subscription through my website. There are $2, $5 and $10 tiers available. Rewards include access to my secret behind the scenes blog, art prints of my work, monthly video chats and voting power on creative decisions in the film.