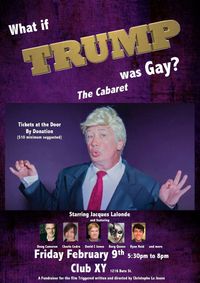 What If Trump Was Gay? The Cabaret

Borg Queen is performing in the cabaret style show What If Trump Were Gay? The show is a fundraiser for the LGBTQ indie film 'Triggered' that Jenny Kirby worked on as the art director. The film features the politically charged single 'We're All Whores' by Borg Queen. TICKETS AT THE DOOR BY DONATION.