People ask me what I do all the time, and never really have a succinct answer that doesn't make me sound a. Horribly pretentious or b. Completely unfocused. I always end up explaining to them the entirety of what I do within the project 'Borg Queen' which usually goes something like this...
"I have a multidisciplinary art project where I write and record songs, but for each song that I write I do a painting to visually convey the concept behind the song. I also make music videos and I use the painting as the visual inspiration for the imagery in the video. I'm also a dancer with a background in theatre so for my live performances I like to do a theatrically driven show that incorporates other performers, choreography, props and FX."
It's usually followed by me showing them pictures on my phone of my paintings, music videos and the behind the scenes shots of the process.
So why work in so many mediums to simply express an idea? The short answer is because I can. The long answer is because some people are more inclined to process audio information effectively and others are more visually inclined. Also, there are layers and complexities within a concept that lend themselves better to audio and some that can only be expressed visually. One of the more common questions that I get asked is:

Do I work on the audio or visual aspect of idea first?

For my previous album it was sometimes the image came first. Sometimes the lyrics were the first thing to pop into me head, but for a couple of the songs I definitely wrote the music before anything else based on the overall idea I wanted to express.
For my upcoming EP 'Blood Sweat Tears' my process has been more formulated, not on purpose, but there's definitely been an order to the way I've been working.

First I wrote the lyrics.

This EP is me venting emotionally, mentally, socially, physically and sexually. There was a lot of sadness, rage, regret and anxiety I was bottling up inside much to my psychological detriment, and finally last August I had a nervous breakdown. I fell apart on every level of existence. I was having a recurring nightmare about being a serial killer who was on the run. I finally figured out that the dream was symbolic of me killing my emotions and burying them. So I decided to do something for my mental health, and I started writing down all of the dark thoughts that I had been concealing deep within my psyche. 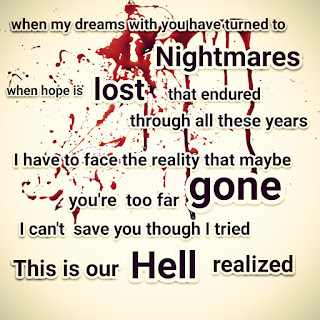 Next I wrote the music.

I didn't want to over think it, so I kept it pretty simple as far as the song structures went and I avoided second guessing myself. I figured if I don't like it, I can always delete the file and start over again. I wrote, produced and recorded the songs within the span of about 2 weeks. In those two weeks that I was belting out my vocals, I felt a release and the recurring serial killer nightmare ended.

Currently I'm working on the artwork.

Right now I'm working on the visual development for the EP. I'm currently sketching full color thumbnails for the paintings each song will have. Eventually the paintings will serve as the visual framework on which I base the music videos.
My process so far in the visual development will be for me to sit down and start writing the lyrics. As I write the lyrics down, visuals will pop into my head. It almost like having several frames from a video in random order flip through my minds eye. I take a mental screenshot of the images I feel are the most powerful and then recall them as I start sketching. Next I add color and this is a really important step as the palette I use in the painting will determine the palette used in the videos. For all of the visuals in this EP the palette is representative of blood, sweat and tears. I'm using red for blood, flesh tone for sweat and blue for tears.
I'm taking a more literal approach with the actual paintings and adding my own blood, sweat and tears into the medium. I'm currently posting videos of my process on my Pledge Music campaign for the EP. Anyone who wants to join me in my artistic journey creating the EP gets an access pass to the exclusive videos and regular updates that I'll be posting along the way.

So far it's been a really fun collaborative effort and I've loved communicating with my pledgers throughout the process so far. The feedback has been overwhelmingly encouraging and I'm so grateful that platforms like Pledge Music exist for me to connect on a very intimate artistic level with my fans.

After the EP is completed and released, I will be turning my attention to making a music video for each and every one of the songs on the EP. The videos will all transition seamlessly from one to another telling the story behind the demise of my psyche in 2016 and how I got it back by confessing to being a "Serial Killer."