It's been another crazy week of balancing Borg Queen, my film industry job and the silly-ass nautical art I do on the side. Oddly enough the nautical art is almost to the point where it makes me a living wage, but alas I have no deep passion for it and I don't want to be known as "that nautical artist." At this point I'm basically "that nautical whore," but there are worse ways I could be whoring my skillset. I made this satirical magazine cover today to celebrate my artistic whoredom. 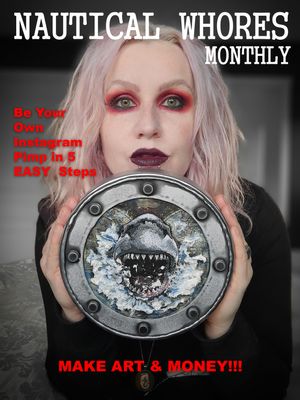 Don't get me wrong, I think it's cool that so many people like the nautical art and want to buy it, but my bionic heart belongs to Borg Queen. It's the art that truly is a reflection of my psyche. I'm not giving it up, but I'm starting to seriously rethink how I'm going to go about producing content. I'm currently setting up a micro patronage subscription model kinda like a Patreon or Only Fans type idea, but it's going to be directly through my website so all of the proceeds go directly to me and will help me create more content on a regular basis and also interact more with my audience. Since live shows aren't happening for a while I think this will be a really great way to connect with my fans.

This week I started setting up the subscriptions and I've decided to go with 3 levels starting at $2 per month. What I'm going to do is have a secret blog that I'll be updating with behind the scenes content and getting everyone to vote on creative decisions. The higher level of subscriptions will include perks like free merch and one on one video chats.

Since I'm going to be working regularly on "A Bionic Holiday Ballad" for at least the next couple years it'll give my audience a chance to become creative collaborators while at the same time helping finance the production. This past week I designed a logo. It's not the final one by an means. I'm going to be designing a few more versions and I'll be getting the subscribers to vote on their favorite version. Here's the first one I've come up with.

The logo design is a pretty big deal because it's not only a branding thing, but also it's going to go on all the title boxes of everything I'm designing for the film. I'm super excited to apply everything I've learned so far working in the film industry to "A Bionic Holiday Ballad." I've learned so much already and also some really great tricks for streamlining my workflow. So far I've completed the screenplay and put together some inspiration boards, but I'm not going to be revealing those until a later date. The inspiration boards I'll be posting on this blog, but the screenplay is only going to be shared with subscribers.

I still don't have access to my Borg Queen Facebook Page, and I've really grown tired of Facebook censorship and pesky algorithms that don't tend to favor my content, so I'm really hoping this subscription idea takes off. This year has certainly been one of learning to adjust to adversarial circumstances. I feel like this is just another bump in the road, but just like the Borg I will analyze and adapt.